Harper Lee Ever After 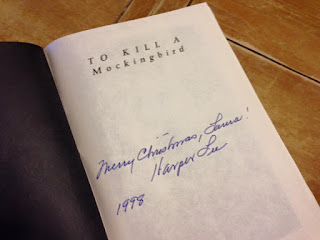 Probably the best present I ever got my wife was a personalized, autographed copy of To Kill a Mockingbird, signed by Harper Lee herself. It's the 35th Anniversary edition, and there are a lot of autographed copies of that edition going around. People now seem to be asking a minimum of $600 for one.

First, I do believe these copies to be authentic. Why are there so many? Here's why:

Back in early 1998 I noticed a lot of copies appearing on eBay, usually for around $150. I contacted one seller, asking where they got it, and why there were so many. They kindly explained that two bookstores in Monroeville AL, Beeland's and Magnolia Cottage, were selling them. Harper Lee was spending a lot of time in Monroeville caring for her sick sister, and she had agreed to come in to the stores periodically and sign copies of the book for people to order.

I contacted Beeland's, confirmed this story, and was shocked when they said they were selling them for (if I remember correctly) $21, only $3 more than the cover price of the book. I asked for one, personalized for my wife, and sure enough it arrived promptly.

So, either two bookstores in Harper Lee's own hometown were running a wide but very low profit scam, or it's real. The signature certainly looks authentic, compared to those I can find on the Internet.

But this apparently didn't last long. Laura and I visited Beeland's on our "babymoon" in 2000, and they said that when Harper Lee got word of copies being sold on eBay for exorbitant prices, she quit signing them. So I got very lucky with the timing, I suppose.

The inscription, in blue pen, says: