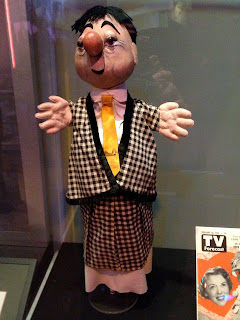 It's fitting for me to at least begin this post in Chicago. I'm here for the Chicago International Children's Film Festival, but the Windy City is also the birthplace of Kukla, Fran, and Ollie. Above is a photo I just took of Colonel Crackie, sadly the only one of the Kuklapolitan Players on display in the Chicago History Museum. All Burr Tillstrom's puppets and archives were donated to the museum on his death, and it's hard to fathom their decision to only display a relatively unknown character, rather than Kukla and Ollie themselves.

I've read that Tillstrom didn't like seeing puppets on display, because they seemed "dead", but there's also word that he later said he didn't mind his characters being seen in a museum after he died. So if the Chicago History Museum thinks they're somehow obeying Tillstrom's "wishes", then why display even Colonel Crackie? And if they're ignoring his "wishes", then why not display the two unquestionably best remembered characters? Still, it's good that people can at least see Colonel Crackie (even though his view of us must be a bit blurry due to the fact that his glasses are missing).

I have recently watched the more than 18 hours of KFO available on the new DVD releases, and I have a bunch of thoughts on the show I wanted to set down, which may not organize themselves neatly into an essay or anything like that. But here goes:

Burr Tillstrom's puppetry was wonderfully expressive. He was the real pioneer in the field of video puppetry. His performances are always strictly "stagebound"; Jim Henson would be the one to later treat the TV screen as its own puppet stage, and do away with a physical stage. But the Kuklapolitan Players always appear firmly within their own proscenium arch.

Tillstrom was able to monitor his performance in two ways. He puppeteered standing up, working his puppets directly in front of his face, while watching the action through a one-way scrim. But he anticipated Henson in the use of a video monitor, positioned off to his right, where he could also see exactly what the camera was recording. This dual system enabled him to perform extraordinary feats, such as having Kukla and Cecil Bill, in the episode "Lemonade", make an entire pitcher of lemonade starting from whole lemons!

Probably the biggest obstacle a modern audience faces in fully appreciating Tillstrom's puppetry is the matter of Ollie's lip sync. Ollie was the only moving mouth puppet amongst the major Kuklapolitan Players, the rest being traditional "three-finger" hand puppets. Ollie's lip sync can best be described as "haphazard". Sometimes his mouth doesn't open at all when he speaks. Sometimes it opens only on a single random word in a sentence. Sometimes it opens nicely on all the accented words in a sentence. And sometimes it snaps shut on the words.

I wondered if the seemingly-obvious concept of accurate puppet lip sync was another invention of Henson's. But Edgar Bergen operates Charlie McCarthy's mouth quite believably and consistently in 1930s films. I wondered if Tillstrom's lip sync "got better" as the years went on, and the influence of the Muppets became predominant. But a 1979 Match Game appearance, 30 years after their debut, shows things to be basically unchanged in this regard.

Could it have anything to do with the fact that Ollie was worked exclusively on Tillstrom's left, non-dominant hand? Tillstrom was ambidextrous with the other Kuklapolitans, but Kukla is always operated on his right hand, Ollie on his left, no exceptions.

In the end, one has to simply accept that lip sync was a "low priority" for the multitasking Tillstrom. Kukla's fixed mouth doesn't move at all, so isn't it a bonus that Ollie's mouth moves at least sometimes? Tillstrom was unmatched in terms of characterization, and Ollie is a wonderful, rich character. Perhaps we can pretend that Ollie is practicing ventriloquism?

Another area where Tillstrom was truly unmatched is in musical gifts. The man could sing, and the show really soars when he and Fran share a song. Ollie has a commanding baritone, always with perfect pitch and great expression. Kukla suggests that Tillstrom might have had an impressive career as an operatic countertenor. Throughout the original show, he had incredible control over Kukla's falsetto, singing complex harmony parts, never sounding shrill or forced, and often with a tone and sensitivity I wouldn't hesitate to call "beautiful". Fran Allison had a terrific, smoky voice, and was an excellent singer. Burr was every bit her musical equal.

And let's have a moment of appreciation for Fran too! She has a wonderful, frank, direct quality, never overly sweet or treacly, and was quite the wisecracker herself. The affection between her and the Kuklapolitans (and of course, by extension to Tillstrom) is quite palpable, but she's never afraid to bicker and argue with the characters. She's a great improv partner. She was in her early forties when she started the show, and I truly admire how she allowed herself to age gracefully and naturally on camera, from a quite attractive young woman to the grandmotherly figure I remember from the CBS Children's Film Festival.

KFO inspired Paul Gallico to write the short story The Man Who Hated People, which he then adapted into an unpublished story called The Seven Souls of Clement O'Reilly. That story was then adapted by Helen Deutsch into the screenplay for the movie Lili, and adapted by Gallico himself into his novella Love of Seven Dolls. And finally, Lili was adapted into the Broadway musical Carnival. In all iterations, the main character is always a bitter, antisocial puppeteer, painfully shy, hiding his face, shunning the public, only able to express himself through his puppets. In reality, Burr Tillstrom was the polar opposite of this puppeteering cliche he inspired. He obviously relished appearing on camera himself, doing so with one of the puppets at the end of every episode. There are abundant publicity photos of him, with and without Kukla and Ollie, and he even found an excuse to dance on camera with Fran Allison in a later episode. There is a 1955 TV version of Alice in Wonderland that I would love to see, in which Tillstrom not only puppeteers the Cheshire Cat, but appears himself as the melancholy Mock Turtle.

Jim Henson is often given credit for his willingness to balance commercialism and art. Here too, Tillstrom was a pioneer. Kukla, Fran, and Ollie gladly embrace whatever sponsor they have at the time, be it RCA Victor, Sealtest ice cream, or even Pard dog food. The shows were entirely ad libbed, and they slyly work pitches for the products into the show, always ending with a final plug.

The show had three distinct phases. It began as Junior Jamboree on October 13, 1947, and appeared five days a week, Monday through Friday, apparently for an hour each day. By January 12, 1949, it was renamed Kukla, Fran, and Ollie, and was a half hour, five days a week show. The first kinescope available on the DVDs is from February 28, 1949.

On November 29, 1951, the show was cut back to 15 minutes daily. There was an outcry of protest, but there must have been economical reasons for this change. I get the impression that, like the comic strip Krazy Kat, KFO was the darling of the critics and cognoscenti, but never a huge smash hit with the general public. And frankly, I feel that creating two and a half hours of live, improvised television weekly strained the resourcefulness of even Burr Tillstrom and Fran Allison. The 15-minute shows are obviously much more compact, and maybe a trifle rushed, but they certainly never drag.

Then on August 24, 1952, the show again received what could be termed a "cutback", but in reality was an expansion that allowed it to blossom to its fullest. It moved to just one single weekly half hour show, on Sunday afternoon. But what it lost in scheduling "real estate", it made up for in spades with the addition of a sizable studio audience, and a wonderful 12-piece orchestra. These two elements really allowed the comedy and music in the show to soar. Gone were the lonely solo piano of Jack Fascinato and the quiet chuckling of the studio crew. In these Sunday shows, lasting until June of 1954, the show truly hit its peak.

I want to end this post with a look at the intersection of KFO and another of this blog's obsessions: Stephen Sondheim. In 1952, a then-unknown Sondheim wrote a song called "The Two of You" for KFO, and sent it to producer Beulah Zachary. In Look I Made a Hat, Sondheim writes of wanting

...desperately to place a song on a TV show I adored as much as this one. It was rejected by the show's producer, but twenty-five years later Burr became the compere of the Chicago company of Side By Side By Sondheim...There was no Fran, but there were Kukla and Ollie, and Burr sang this song to them. Not only was it touching in itself, but he revealed the puppets on his arms as he animated them, something puppeteers rarely do and which he had never done on the television show.


Sondheim isn't quite correct about Burr never revealing the "working end" of the puppets; he did this at the end of the earliest KFO shows as well, and from time to time in other appearances too. Tillstrom took over in Side By Side from Cyril Ritchard, who had a heart attack mid-performance less than a month after the Chicago company opened.

Then less than a month after the Chicago production closed, Tillstrom and the Kuklapolitans traveled to New York and replaced Hermione Gingold for the final three weeks of the Broadway production of Side By Side in 1978. Happily, an audio recording exists, in which Nancy Dussault "plays Fran" and sings the song, with Kukla and Ollie joining in towards the end.

It must have been hugely gratifying to the stagestruck Burr that he finally made it to Broadway. His Berlin Wall hand ballet offers further proof that he was an artist of the highest caliber, and I heartily recommend the KFO DVDs.