Ringo and Me at the Ryman

I got the Ringo at the Ryman DVD, and it's great! I'm amazed that it seems to contain every second of the actual concert, every song, every comment.

And through extensive freeze-framing, I was able to locate us Fotts in the audience in a few shots! My son's bright orange shirt was the key.

It was a great pleasure to collaborate with Ringo on the creation of this DVD! Now I only need to wait for those royalty checks to start coming in... 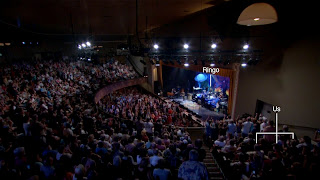 Posted by Galen Fott at 8:57 AM No comments:

A few months ago, I discovered this old CNN Headline News story on a VHS tape, digitized it, and posted it on YouTube:

It provides what I believe to be the only video of Christopher Robin Milne to be found anywhere on the Internet.

Milne is generally regarded as a curmudgeonly fellow, not at all happy about being the living embodiment of a famous children's book character. This image was of course spawned from his own book, The Enchanted Places. And yet...almost miraculously in the only 10 seconds of video we have of him, after he says the word "victory" in this clip, does he not seem to take a short pause as if almost overcome by emotion, before continuing? His mere presence bespeaks a personal concern in what happens to Ashdown Forest, but to my eye, this little clip reveals his true emotional investment in the circumstances of his childhood.

At any rate, I'm awfully glad things turned out well for the forest, as we spent a delightful day there in 2010, playing Poohsticks and exploring. Beautiful country.
Posted by Galen Fott at 11:15 AM No comments:

Well, what a pleasant surprise that was! I'd anticipated Pericles to be one of Shakespeare's "bargain bin" plays, and while there are definitely ways in which it falls short, the BBC Shakespeare production was quite captivating.

This is the one about which I feel it can most be said: "Why isn't this play produced more often?" Okay, Shakespeare apparently only wrote the last half. There's not a great dramatic arc to the story, a lot of questions are left unanswered, and Pericles himself isn't a very deep fellow. But taken as a sort of Candide-like string of adventures, the play is packed with interesting incidents: shipwrecks, riddles, jousting, incest, a brothel, and bringing the dead back to life!

And I have to say, as presented here, I found the scene where Pericles is reunited with his daughter Marina to be as moving as anything I've seen in the whole series. It helped enormously that it began with the gorgeous Amanda Redman beautifully singing an exquisite song by Martin Best, accompanied by Frances Kelly on harp.

One of the rewards of watching the entire BBC series is seeing actors popping up from time to time in different roles. As Lysimachus, it was nice to see Patrick Ryecart finding love with a much happier ending than he did as Romeo in the series' inaugural production, six years earlier!

And I would of course be predisposed to like this production of Pericles anyway, simply for the fact that it contains five members of the RSC's Nicholas Nickleby! Edward Petherbridge spoke John Gower's narration beautifully (in an odd, quasi-American/Irish accent). His former employer John Woodvine brought his accustomed chill to the wicked Antiochus. Patrick Godfrey, who didn't have a lot to do in Nick Nick, made a strong impression as the stalwart Helicanus. Christopher Ravenscroft, who made a strong impression in Nick Nick, didn't have a lot to do in Pericles. And last-but-oh-my-certainly-never-least, Lila Kaye showed again what a scene-stealing powerhouse she could be as Bawd.

Kudos to director David Hugh Jones for an excellent production.
Posted by Galen Fott at 11:05 AM No comments: