Saw the "Nutty Professor" musical in previews last week! Enjoyed it very much. Perhaps at some point I'll expound upon the experience a little, but in the meantime let me say "Bravi" to all involved, I think the show has great potential, and thanks to The Nuttiest One himself — Jerry Lewis — for appearing at curtain call!

I was surprised to hear that Broadway star Alice Ripley did time in 1992 as a Hee Haw Honey in the final year of "Hee Haw". Twern't hard to find the evidence, though. That's not her in the frame below, but she's the first one to appear in this video (with fellow "Les Misérables" Broadway star Gary Morris).

She's not in it again after the first 12 seconds, so you can quit watching after that. You're welcome.

All Aboard with Mr. Be!

One of my earliest TV watching memories is a show called "All Aboard with Mr. Be". It aired on WDCN, the Nashville public television station we watched in my hometown of Clarksville. A little recent research revealed that the show was shot at WKNO in Memphis. I also read that the puppets were built by legendary Nashville puppeteer Tom Tichenor, and performed by a Memphis high school student named John McDonald. I have always remembered the name of one of the puppets, "Poncey de Lion", who was of course a lion.

And today I got confirmation via email that the "Mr. Be" puppeteer was the same John McDonald who is now artistic director of the Roxy Regional Theatre in Clarksville! John and Tom Thayer have done an incredible thing in creating a professional theatre in Clarksville. I saw their "Into the Woods" a couple of years ago, and was very impressed.

As I told John, my childhood self would be very proud that my grownup self knows Poncey de Lion personally!
Posted by Galen Fott at 11:36 PM 4 comments: 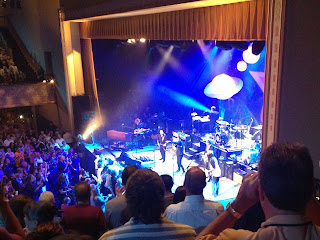 Wow, what a great concert! Ringo Starr and His All-Starr Band played the Ryman last night on Ringo's 72nd birthday, and we were there! Burton, Laura, and I have now seen two Beatles live, and I'm afraid it's going to have to stop there.

Earlier in the day, I braved the 100+ degree heat solo to attend Ringo's traditional "Peace and Love" moment in front of the Hard Rock Cafe at noon. I was able to snag two of the white P&L wristbands that Ringo and others tossed to the crowd, but I wasn't so lucky with the large peace-symbol-frosted cookies.

The concert started at 8. While my knowledge of 70s-80s rock is severely limited, I knew practically every song played last night. The line up of the All-Starr Band was Todd Rundgren, Steve "Toto" Lukather, Gregg "Santana" Rolie, Richard "Mr. Mister" Page, Gregg Bissonette on drums, and Mark Rivera on everything else. When Ringo wasn't singing up front, he drummed on every number except Black Magic Woman. (He played a cajón on Page's "You Are Mine".)

Ringo played a piano intro on "Don't Pass Me By", which he described as the first song he ever wrote. He seemed a little sheepish about it, and after the song he mentioned the lyric "You were in a car crash/And you lost your hair", saying something to the effect of "When I wrote that, I thought 'Look out, Lennon and McCartney!'". Nice to hear the song, but I'm probably not the only one who wishes he had done "Octopus's Garden" instead. Or both.

With the exception of "With a Little Help From My Friends", Ringo sang all his hits in lower keys, sometimes by as much as a fifth. But if you were going to a Ringo concert for his sterling vocals, you were going to be disappointed anyway! He sounded great. He's Ringo. He's a Freakin' Beatle. Who can quibble? And he looked incredible; not an ounce of body fat on that 72-year-old frame!

When Ringo returned to the stage after "Black Magic Woman", Rivera led the house in singing "Happy Birthday" (the traditional song, not the Beatles one). Ringo joked: "Thank you, Mark! Enjoy this show; it's your last." Ringo then sang "Anthem" from his latest album, which he followed with the Lennon-penned "I'm the Greatest". Funny to hear him sing "Now I'm only 72/And all I wanna do/Is boogaloo"!

It was after this number that we got a special guest, as Joe Walsh took the stage to perform "Rocky Mountain Way". Walsh returned at the very end to sing backup on "With a Little Help From My Friends", along with Brendan Benson, Kix Brooks, Gary Burr, Felix Cavaliere, Vince Gill, Richard Marx, Brad Paisley, and Lucy Walsh.

There were several videocameras there, including one on a jib; the concert will reportedly be released on DVD! Look for me in it; I'll be the middle-aged guy in the audience with the big smile on his face.

UPDATE HERE!
Posted by Galen Fott at 10:25 AM No comments: