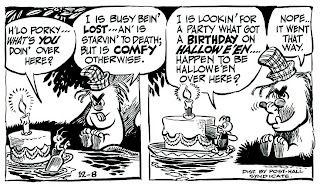 It's the saddest thing.

I thoroughly enjoyed Bona Fide Balderdash, Volume 2 in Fantagraphics' complete reprinting of Walt Kelly's "Pogo" comic strip. This volume covers the years 1951-52. There's a decent amount of biographical information in the two volumes, and in this one we begin to see a recurring event mentioned in Steve Thompson's introduction to the first volume. (I've gleaned the information below solely from the two Fantagraphics books.)

In early 1951, Walt Kelly and his first wife Helen DeLacy were divorced. (Walt and Helen had three children.) Later that year, Walt married Stephanie Waggony. On October 31, 1951, Kathryn Barbara Kelly was born to them. (Walt and Stephanie had five children in all.)

I don't know the cause, but Kathryn died shortly before her first birthday. It's a testament to what a personal means of expression "Pogo" was for Kelly that he found a way to mark this tragic event within the strip. It's something that the average reader would never pick up on, but it's so poignant and melancholy and personal that I find it remarkable.


Kelly had to work several weeks in advance, so although this strip appeared on 12/8, it was probably drawn very shortly after Kathryn's death in late October.

Kelly returns to the theme again in the strip for Christmas Day. Porky has saved the piece of cake to give Pogo as a present. The last panel has this exchange:

Pogo: I'll git two glasses of milk an' us'll divvy up the cake an' celebrate.
Porky: Thank you....I'm glad somebody has a birthday once in a while.
Pogo: Me too, Porky.


Words can't do justice to the sad expression with which Pogo is looking at the piece of cake.

The strips for late 1952 were gathered and published in 1953 in the paperback "The Pogo Papers". Kelly usually did a bit of editing to the strips for book publication, adding and deleting panels to help the continuity flow better. He left these two strips out entirely.

But it doesn't stop there. Steve Thompson writes that Kelly kept up the tradition in late October, year after year; the bug still drifting through the swamp, still on the one-candled birthday cake, still searching in vain for Kathryn B.
Posted by Galen Fott at 10:32 AM