Of Angry Birds and Rath-ful Pigs

I can find no evidence that Jaakko Iisalo, the Finnish designer of Rovio Entertainment's "Angry Birds" franchise, owns up to any influence from Lewis Carroll. But I see a connection!

At its simplest, the goal of the "Angry Birds" video game is to catapult birds through the air in an attempt to destroy fortresses constructed by green pigs. 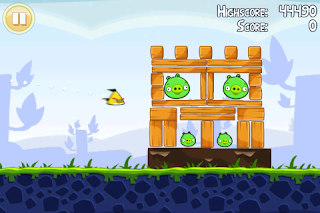 In Chapter One of Through the Looking-Glass and What Alice Found There, Alice reads the poem "Jabberwocky", which famously begins:


'Twas brillig, and the slithy toves

Did gyre and gimble in the wabe:

All mimsy were the borogoves,

And the mome raths outgrabe.

In Chapter Six, Humpty Dumpty explains parts of the poem to Alice, including that a rath "is a sort of green pig". Furthermore, in Martin Gardner's The Annotated Alice, Gardner states that in Carroll's day, rath "was a well-known old Irish word for an enclosure, usually a circular earthen wall, serving as a fort and place of residence for the head of a tribe."

So the word "rath" connotes both "green pigs" and "fortresses"! Also, "rath" is a homonym of "wrath", which is a synonym of "anger", which again reminds us of those catapulting birds. Is Iisalo a reader of The Annotated Alice?
Posted by Galen Fott at 11:40 AM No comments:

What happened to Emily's baby?

Thornton Wilder's Our Town is my favorite play. But a question recently occurred to me that I'd never thought of before, and I couldn't find anyone else wondering about it anywhere online. That question is this:

What happened to Emily's baby?

In Act 3, we learn from Emily's cousin Sam Craig and the undertaker Joe Stoddard that Emily has died:


Sam Craig: Joe, what did she die of?

Joe Stoddard: Oh, didn't you know? Had some trouble bringing a baby into the world. ’Twas her second, though. There’s a little boy ‘bout four years old.

The now-dead Mrs. Gibbs confirms that Emily died "in childbirth". Emily then joins Mrs. Gibbs and the other dead onstage:

Emily: Yes, he loves it there.

Clearly, Emily is talking about her four-year-old son. Later:


Emily: But, Mother Gibbs, one can go back; one can go back there again…into living. I feel it. I know it. Why just then for a moment I was thinking about…about the farm…and for a minute I was there, and my baby was on my lap as plain as day.

Mrs. Gibbs: Yes, of course you can.

Emily: I can go back there and live all those days over again…why not?

The "rules" of Wilder's afterlife seem only to allow reliving days, not resuming life as if one had never died (the 1940 movie notwithstanding). So the baby Emily refers to here must again be her now-four-year-old son.

Finally, when Emily is advised to relive only an "unimportant day", she says:


Emily: Then it can’t be since I was married; or since the baby was born.

Once more, "the baby" has to be her firstborn. And that's the last mention of Emily's offspring in the play.

• Did it live? Emily never mentions it, or who's taking care of it during the funeral, as she does with her four-year-old son (whom she mentions three different times). Emily notes that the farm "won't be the same to George without me", but doesn't express a word of notice that George has been left alone to raise a newborn baby? This option doesn't seem likely.

• Did it die? In that case, why doesn't it join Emily among the dead onstage (as impractical as it would be to stage this)? I mean, is there some sort of afterlife daycare somewhere? And why is there no mention or sign of a funeral for the baby, from Joe Stoddard or anyone else?

Wilder's notion of Emily dying during childbirth is deeply poignant. But by choosing it, he introduces a question into the play that doesn't seem to have a satisfactory answer.

However, it's clear that the ambiguity was deliberate. The first published edition of Our Town from 1938 reflects the script before it went into rehearsal, and there are numerous differences. In this version, Wilder firmly answers the question:


Sam Craig: Joe, what did she die of?

Joe Stoddard: Oh, didn't you know? Had some trouble bringing a baby into the world. Let's see, today's Friday—'twas almost a week ago now.

Sam Craig: Did the baby live?

So there it is: an answer, of sorts. Of course, the deliberate ambiguity in the standard script does leave the question open, and a production that featured someone holding a baby at Emily's funeral could seem to imply the opposite answer. But personally, I'm not feeling good about the baby's fate.

Thanks to Rosie Strub of The Wilder Family LLC and Lincoln Konkle of the Thornton Wilder Society for helping to solve the mystery.
Posted by Galen Fott at 2:00 PM 1 comment: