Watch Me Move: The Animation Show at the Frist

The Barbican exhibit Watch Me Move: The Animation Show just left the Frist Center for the Visual Arts here in Nashville. Next stop for the exhibit is Monterrey, Mexico. I am very glad to see the art of animation treated so seriously by Nashville's premier gallery/museum. I spent around 12 hours total in the exhibit, and saw several terrific films I had never seen before. But I did come away with some thoughts and questions I wanted to set down.

• First, I am still skeptical that an exhibit in a gallery is a proper way to experience a film. The way the exhibit was organized, it practically invited the viewer to "graze" from film to film. As any filmmaker will tell you, a film is made to be experienced straight through from beginning to end, and with as few distractions as possible. By inviting the viewer to drift from film-in-progress to film-in-progress, I felt the exhibit was reinforcing the fallacy that animation is a "genre", and not a "medium". Each film deserved to be seen in its entirety, free of visual and audible distractions, and not just as another example of "animation". I didn't feel that was possible in the exhibit.

• While Eadweard Muybridge is of course revered and celebrated by animators for making possible the frame-by-frame analysis of movement, it seems to me that he was much more concerned with the development of motion pictures than animation itself.

• Picky, but there were a few typos in the wall text.

• The Lumiere Brothers' 1898 film "Le Squelette Joyeux" is not animation. The exhibit is hardly alone in calling this one of the first stop motion animated films, but it is no such thing. It is, purely and simply, a film of a "breakaway" skeleton marionette. Thus, the comparison to Iwerk's (sic) "Skeleton Dance" was pointless.

• Some of the captions seemed to be written by someone who had no grasp of what they were writing about. For instance, it was said that Caroline Leaf "made her debut film by manipulating individual frames of images drawn in sand spread across the surface of a light box". Um...what? The words "individual frames of images drawn in" could be eliminated from that sentence, and then the reader might have some idea of what Leaf actually did. The explanation of time-lapse photography for "Birth of a Flower" was similarly convoluted and tortured.

• Gollum in "Lord of the Rings" is unquestionably a groundbreaking animated character, highly worthy of inclusion in the exhibit. But of all the fantastic scenes that could have been chosen, why did they pick a sequence showing Smeagol's transformation into Gollum, which was approximately 90% nothing more than actor Andy Serkis in makeup? Baffling.

• Pixar claims "The Adventures of André and Wally B." as their first film, not "Luxo Jr.".

• Why was the editing in the large projection "Characters" sequence so appallingly crude? Sound levels were inconsistent from clip to clip, video quality varied hugely (some clips looking much worse than even standard definition TV), and beginning and ending lines of scenes were awkwardly cut off and faded to black. And what precisely was the criterion for inclusion here? Well-known animated characters who have spawned serial adventures? Then why the "Roger Rabbit" clip of Jessica Rabbit? Why a clip from the "Creature Comforts" TV series instead of Nick Park's original film — or, much more logically, a clip of Wallace and Gromit? And what in the world was a clip from Bakshi's "Hey Good Lookin'" doing in the sequence? This is a well-known character? Who has even seen this film?

• What specifically about "La Plage" and "(Tommy-Chat Just E-mailed Me)" qualified them to be regarded as "animation"? Whatever their merits might be, they aren't examples of animation. It's painful to think of all the worthy films that might have been included instead.

• It's a shame that the 11-minute "Story of Rapunzel" looped with the 63-minute "Tale of the Fox", and the 15-minute "Spider and the Tulip" looped with the 73-minute "Princess Iron Fan". While I understand the thematic pairings, the vast majority of attendees never saw a single frame of the shorter films. Paired the other way, each film would have approximately a 50% chance of being seen.

• It's a pity that no mention was made of Otto Messmer in the caption for Felix the Cat. Messmer is regarded by many animators as Felix's true creator (John Canemaker wrote a book about it), and Pat Sullivan most certainly didn't draw the Felix comic strip!

• I was glad to see that somewhere between the opening of the exhibit and the closing, Run Wrake's year of death was added to the wall description for "Rabbit".

So, this basically reads like a long list of grievances. Again, I'm very glad the Frist hosted the exhibit. But I can't help thinking the whole thing was curated by someone who didn't have an especially firm grasp on the art, history, and breadth of animation.
Posted by Galen Fott at 9:42 PM No comments:

I know, I know. Just like me, through Google Books, you found Stephen Sondheim's "Code I" puzzle in the May 12, 1969 issue of New York Magazine. But the encoded clue for 16 Down doesn't make sense! Sure, you checked the solution to the puzzle, as printed in the June 2, 1969 issue. And okay, while the solution acknowledges the error — "Apologies for the letters omitted from the clue for 16 Down" — it doesn't say what the missing letters are! And to make matters worse, the mistake wasn't even corrected for publication in the book Stephen Sondheim's Crossword Puzzles!

No problem. I figured it out. It was not easy, oh no, it was not easy, and so I'm going to say it again in all caps: I FIGURED IT OUT. (I used Adobe InDesign to solve it. No joke.)

There. You're welcome. I feel certain this post will be the one to skyrocket my blog to the heights of popularity in the blogosphere.
Posted by Galen Fott at 8:53 AM No comments: 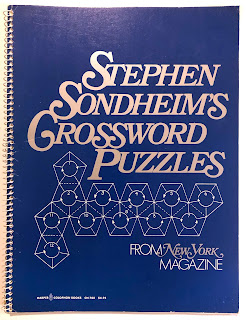